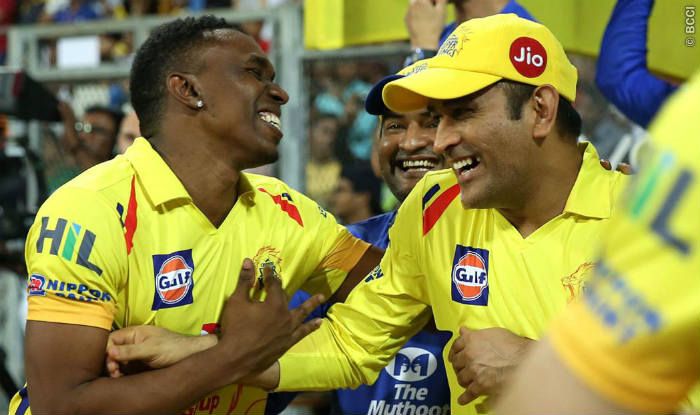 Hailing Chennai Super Kings skipper MS Dhoni’s ability to remain calm under pressure, Dwayne Bravo said his presence has a massive impact in the dressing room. Bravo also said that Dhoni never puts youngsters under pressure which is a great quality to have. Also Read – Natural to Put Saliva on Ball, Will Take Some Practise to Avoid it: Ravichandran Ashwin

“MS doesn’t put pressure on anyone. Outside of cricket, you rarely see him, but his room is always open, so you can walk in there anytime. He”s brilliant to have conversations with, obviously played so many games,” Bravo said. Also Read – BCCI CEO Rahul Johri Optimistic IPL 13 Can Be Held Post Monsoon

Revealing that Dhoni does not behave like a superstar in the CSK dressing room, Bravo said he instead makes everyone comfortable. Also Read – Playing International Cricket Not Necessary to Become a Successful Coach: Gautam Gambhir

“He creates an environment where people feel comfortable and everyone relaxes; he doesn’t behave like a superstar despite all his accolades and achievements,” Bravo said.

In normal circumstances, Bravo and Dhoni would have been currently playing in the 13th edition of the Indian Premier League but due to coronavirus pandemic the tournament was postponed by the BCCI.

“CSK over the years have had many good captains in their dressing room. We’ve had Faf du Plessis, Brendon McCullum, myself, Mike Hussey,” Bravo said in a video uploaded on ESPNCricinfo.

“These guys have been leaders in various countries, but MS (Dhoni) is the type of person who always says that ”you are here because you”re good enough, so when you come here, you don’t need to prove anything to anyone. The franchise sees and it knows what you can offer. Just be yourself”.”