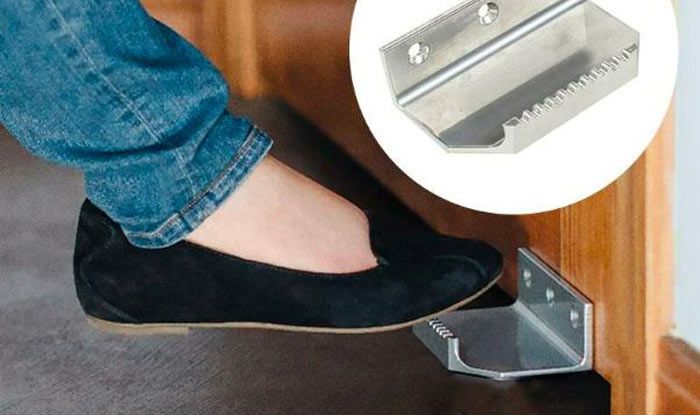 The spread of the dreaded COVID-19 has been attributed to a number of things, but topping the list is the everyday items people use at public places. When visiting public places like malls especially, where thousands of people can be found, one cannot avoid using lifts and escalators. And while touching the rails of the escalator can be avoided, a lift would be useless unless people press the buttons of the floor they want to go to. Also Read – Adorable or Unbelievable: In Fight Between Frog And Leopard, Who do You Think Will Win?

Keeping in mind the fact that a lot of germs can be exchanged while pressing the lift buttons, a mall in Thailand decided to install foot pedals instead to make things easier for shoppers. The pedals were installed outside and inside the elevators at Bangkok’s Seacon Square, and though customers found it confusing at first, they were very appreciative of the idea after they found out what it’s for. Also Read – West Bengal Lays Shattered as Cyclone Amphan Leaves Trail of Destruction in Its Path

There had been a mad rush when the shopping malls in Thailand were reopened on Sunday after they had been closed since March. Along with having to wear masks, people were also asked to maintain a safe distance from one another and to register themselves before entering the premises.

Apart from foot pedals in lifts, people have been coming up with other ideas on how to safely enter a building or open cupboard doors without using their hands. Some have created a tool that is attached to the bottom of the door by which people can just step on it and pull the door open. This device has also been seen as a very good alternative, especially during the coronavirus pandemic.

The directives that had been issued to people who venture out of their houses is to avoid touching objects that are in public places, as they could contain the virus. The fear is that once they touch the objects with their hands, they might touch their face, mouth and eyes and become infected. Now things can become a little bit easier with the new hand-free options that they have.